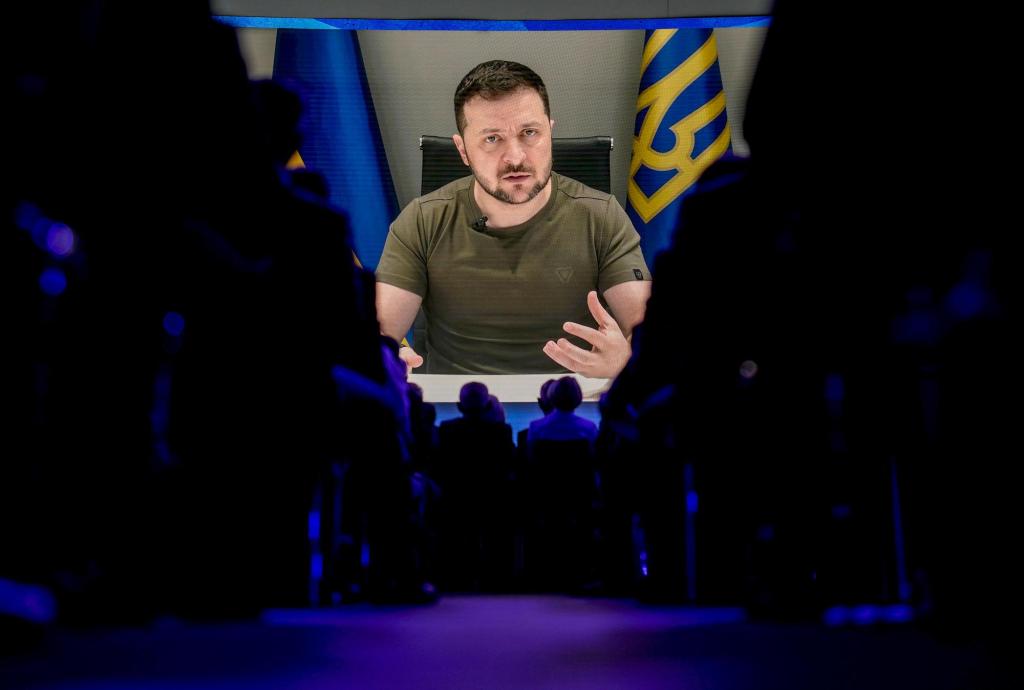 DAVOS, Switzerland (AP) — Ukrainian President Volodymyr Zelenskyy called for “maximum” sanctions against Russia during a virtual speech Monday to corporate executives, government officials and other elites on the first day of the World Economic Forum gathering in Davos.

He said sanctions need to go further to stop Russia’s aggression, including an oil embargo, blocking all of its banks and cutting off trade with Russia completely. He said that it’s a precedent that would work for decades to come.

“This is what sanctions should be: They should be maximum, so that Russia and every other potential aggressor that wants to wage a brutal war against its neighbor would clearly know the immediate consequences of their actions,” Zelenskyy said through a translator.

He also pushed for the complete withdrawal of foreign companies from Russia to prevent supporting its war and said Ukraine needs at least $5 billion in funding per month.

“The amount of work is enormous: we have more than half a trillion of dollars in losses, tens of thousands of facilities were destroyed. We need to rebuild entire cities and industries,” Zelenskyy said, coming days after the Group of Seven leading economies agreed to provide $19.8 billion in economic aid.

He said that if Ukraine had “received 100% of our needs at once, back in February” in terms of weapons, funding, political support and sanctions against Russia, “the result would be tens of thousands of lives saved.”

Zelenskyy’s speech is a key focus Monday at Davos, the village in the Swiss Alps that has been transformed into a glitzy venue for the four-day confab ostensibly dedicated to making the world a better place. The event is resuming in person after a two-year hiatus because of the COVID-19 pandemic, which also delayed this year’s meeting from its usual winter slot.

For the attendees, there’s much to tackle amid soaring food and fuel prices, Russia’s war in Ukraine, climate change, inequality and persistent health crises. But it’s hard to predict if the high-minded discussions will yield substantial announcements that make headway on the world’s most pressing challenges.

“This war is really a turning point of history, and it will reshape our political and our economic landscape in the coming years,” said the event’s founder, Klaus Schwab.

Zelenskyy, who received a standing ovation after this remarks, reiterated that Russia was blocking critical food supplies, such as wheat and sunflower oil, from leaving its ports.

Ukraine, along with Russia, is a major exporter of wheat, barley and sunflower oil, and the interruption of those supplies is threatening food insecurity in countries in Africa, the Middle East and parts of Asia that rely on those affordable supplies.

The head of the U.N.’s World Food Program said in a panel that “the failure to open the ports is a declaration of war on global food systems.” He told The Associated Press that the region’s farmers “grow enough food to feed 400 million people.”

If such supplies remain off the market, the world could face a food availability problem in the next 10 to 12 months, and “that is going to be hell on earth,” WFP Executive Director David Beasley told the AP in an interview.

Beasley called on the world’s top mega-billionaires to aid efforts to prevent hunger: “The world is in real serious trouble. This is not rhetoric and B.S. Step up now, because the world needs you.”

Besides Zelenskyy’s speech, a sizable Ukrainian government delegation is attending in person, making their case for more Western support in the country’s fight against Russia.

Kyiv Mayor Vitali Klitschko pointed to the audience during a panel with his brother, Wladimir, and said, “We are defending you personally.”

“We are fighting, first of all, for values” and to be part of the democratic world, Vitali Klitschko said. “And right now everyone has to be proactive because we pay for that — the biggest prize, human lives every day.”

Russian officials have not been invited to Davos this year, with what was dubbed the “Russia House” having been transformed by critics — including Ukrainian tycoon Victor Pinchuk and the country’s Foreign Ministry — into what they call the “Russia War Crimes House.” The venue features photos of crimes and cruelties that Russian forces are accused of perpetuating.

Meanwhile, the head of the International Energy Agency urged countries and investors not to see energy shocks from the war as a reason to increase fossil fuel investments — connecting the invasion to another major theme at Davos, climate and environmental issues.

“We should not try to justify a new wave of long-term fossil fuel investments on the basis of what (Russian President Vladimir) Putin did,” Fatih Birol said on an energy panel.

Instead, efficiencies, such as reducing leaked methane and even lowering thermostats by a few degrees this winter in Europe would help ensure adequate energy supply.

Russia is a major supplier of oil and natural gas, with the invasion sending European countries scrambling to reduce their reliance on Moscow’s supplies.